HomeConferencesAruwa Capital at the Annual Conference for Female Directors

Aruwa Capital at the Annual Conference for Female Directors 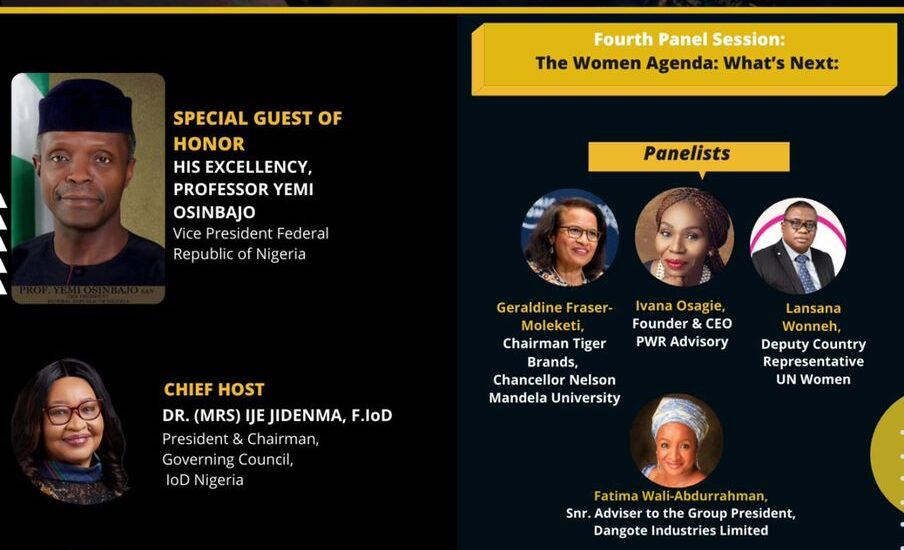 Aruwa Capital was represented on one of the panel sessions at the Annual Conference for Female Directors hosted by Institute of Women Directors in Lagos, Nigeria

Some of the actionable plans to close the gender gap that were discussed by the panel are:

🎯 Closing the gender gap in Boards: Given the encouraging changes we have seen in Nigeria over the last decade where Nigeria has a higher percentage of women in leadership than the global average, it was agreed that it is important to go beyond just counting women but to have an inclusive board where women on those boards actually have influence in decision-making.

🎯 Involving more men: Women in senior management can use their influence to actively involve more men who are already occupying most of these leadership positions and get their support and also educate them on the emergency at hand.

🎯 Elimination of Discriminatory Laws: The panel discussed the need to advocate for the removal of discriminatory laws in various areas of the society in Nigeria, in areas such as marriage, domestic violence, land ownership, citizenship etc. Women need to be protected from gender discrimination in employment and get equal access to available opportunities, e.g. the labour law that restricts women from working night shifts should be changed, as should several others. Ivana I. Osagie spoke in detail about this important topic

🎯 Women in Politics: Research shows we have just 6% of Nigerian women in politics which falls below the global and African standards. With more women in government i.e., in law making positions in the economy, we can tackle gender equality from a legislative point.

🎯 Access to Finance: Research has shown that women diligently repay their loans and typically have very low default rates. However IFC estimates there is a $320 billion credit gap for women. In addition less than 10% of venture capital in Africa is going to female led or founded startups. We need to have more women in investment decision making roles as investing in women is not only the moral thing to do but has been proven to deliver superior financial returns. This is what we are passionate about at Aruwa Capital Management, providing capital to women led and women focused businesses who are underrepresented in untapped setcors.

The panel also talked about education of the girl child and the regression that has occured due to the COVID-19 pandemic.

We are hopeful we can achieve gender equality and real inclusion for women, closing the gender gap in a shorter time frame in Nigeria than the World Economic Forum predicts with some of these steps.

Special thanks to the chief host Ije Jidenma, the 17th President of Institute of Directors and the Chair of the Women Director Development Committee Otunba ‘Debola Osibogun.

Special thanks to Cecilia Akintomide for inviting Adesuwa to moderate the panel session.